Hope you had the most wonderful of Christmases and the New Year celebration of your choice! (Ours was a cosy, quiet and extremely relaxed affair!) 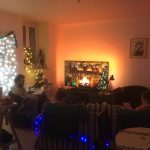 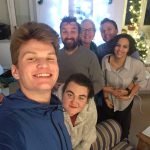 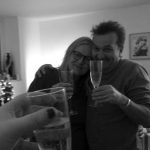 And a Happy New Year!

Before you read any further, please take a look at this year’s Christmas video and Review of 2017 from Beth… I could honestly watch it all day it makes me so happy and tingly!

It’s been all change here as we moved two days before Christmas into a small and cosy flat much nearer Solignac for the end of the renovation. It was quite a gargantuan effort from all concerned, but it feels like a giant leap towards our future home. All but the bare essentials are now stored in the studio in Solignac, and we can be on site in less than ten minutes which will make life so much easier. We bid a heartfelt fond farewell to the house in Bas, which has been such a magnificent and happy home for the last five years. So many happy memories there, it holds a very special place in our hearts! 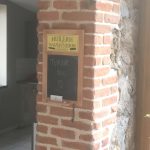 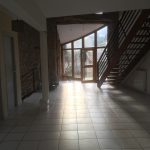 On the family front:

Harry got his code! (The written part of his driving licence) Yay! He’s back with us in a few days to get that driving licence ‘dans la poche’ *in the pocket as quickly as possible.

Arty released the short film he and his friends made in their half term holidays. Well worth a watch, however good your French is!

The teaser for the beautiful series of films Joe and Luke made over the summer were screened to a really appreciative audience: You can see it on the 43 Media Facebook Page (by clicking on the photo below!)

And Luke and Harry played together at a charity event in front of 600 peeps!

Beth came home for the Xmas hols, and we had one glorious cross-over night together before Harry left to spend Christmas in Sweden with Armel.

And meanwhile, down on the farm…

There’s been a fair bit of snow…

Joe has been courageously braving the icy conditions to spread wires all around the house for the first LX fix. Truly in awe of this man… he knows his onions!

Much of this job Joe has done alone, but whenever possible Arty, Luke and Harry have been by his side!

Our beautiful new doors (French windows I guess we’d call them anywhere but here!) have been fitted… oh, the light they give us is glorious!

We were lucky enough to be given a wood burning stove a few months ago. We ordered a chimney and Arty attached the five and a half metres of it to the interior studio stone wall. Since then we’ve been waiting patiently to install the last piece of chimney through the roof. Ironically, just when we’ve needed the heat the most, through this very chilly month, the weather has been too bad to get up on the roof and stick a hole in it so that we could light the fire!

A few days ago, however, the sun came out and we seized the chance. Arty scaled the roof, properly harnessed to keep him safe from harm. He first marked up and cut the hole in the wood from the inside, then he climbed up on the roof, removed some tiles, which Joe cut to size, and added the top part of the chimney. He was so confident and assured up there – big respect to that boy!

And finally, a bit of warmth! Felt like quite an iconic moment!

And the ultimate bedhead!

This beautiful beam will be our bedhead – taken from where the staircase will go, this heavy beauty is being sanded, prepared and hoisted in to place to grace our bedroom!

And I think you’re more or less up to speed – so thank you so much for reading, and I hope your 2018 turns out to be everything you hope for!

← A November to remember