Stunningly beautiful snowy wintery weather has been with us for much of January and February – but we started the year with a few days of T-shirt-worthy sunshine, which we took advantage of to continue working on our beautiful bed-head beam.

It was the only time we got outside though… there has been a lot of snow and it’s been very chilly inside and out!

One day we arrived at Solignac to find we had condensation on the outside! Colder on the inside than in the snow!

We’ve got our work cut out warming up these old stones! We’re confident that we we’ll have it cosy before next winter!

Joe has now finished the first fix of the electrics, with his usual attention to detail – he’s really in his comfort zone here and completed the run of cables (and there are a lot of them!) with aplomb.

And so we take a little side-step away from our comfort zone and tackle the plumbing!

It’s a big old surface to cover, and doing the pipe-work ourselves makes a massive financial difference to our whole project. The plan is to bring in a professional to install and commission the wood-burning boiler.

So with lots of YouTube video watching and late night research to try and do this right, we’ve decided to go the PER (polyethylene) route. It seems to be very popular, and the cheapest and most accessible to non-experts like us.

We’ve been greatly enjoying a French YouTuber LJVS – he’s informative and very funny! We actually contacted him when we realised he’s not far from us, to see if we can get together and he replied – “Pourquoi pas avec plaisir” –

Joe drew up a pipes and water-works plan and we unpacked the A1 printer and printed out a few copies which are strategically pinned up around the house. 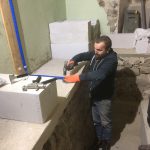 And down to the sunken bath! 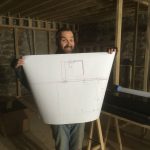 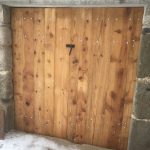 We went to BricoDepôt and filled our trolley with a stack of gear … and got started! 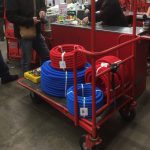 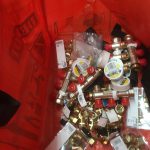 And as half term comes to a chilly end, we’ve pretty much finished the hot and cold water distribution feeds, and are awaiting supplies from a big internet order to start the heating run to the radiators.  It’s looking good so far…although of course we won’t know how well we’ve done until we can run some water through it! Quite nerve-wracking actually, but hugely satisfying to feel that this is another thing we’ve tackled ourselves! 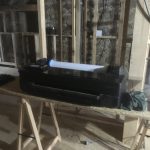 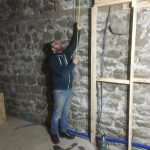 heading up to the mezzanine bathroom 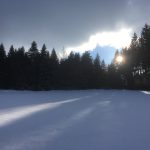 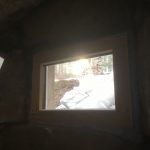 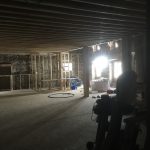 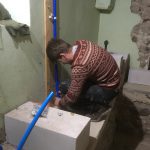 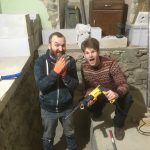 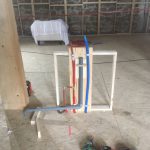 Ready for the kitchen sink

One day in January, we made a spontaneous decision to turn the small hole in the wall in our bedroom (which used to to take the pipe out of the old wood burning stove) into a fireplace! Arty took the sledgehammer to it, and there was no turning back!! We toyed with the idea of an open fire, but I think we will probably put a pellet-burner in there to make the temperature easier to regulate, since it’s a bedroom. Won’t it be glorious to snuggle in on a snowy evening with a real flame!

New Doors to keep out the cold –

The drafty old garage doors have been replaced by another set of beautiful doors made by Joe from old floorboards from the barn – and he’s added a frame to the big barn doors too – what a difference they make!

What a welcoming sight!

From the North East corner, through what will be the pantry and into the kitchen

The bathroom, and two bedrooms on the mezzanine – they will have big metal windows in the rectangles, and a velux in each room too

A shaft of precious sunlight! And all our belongings stacked in the studio behind – that’s a lot of mattresses stacked up from party sleepovers in Bas!

These kitchen windows will have custom made window seats

Harry got his driving licence!! Yay! He headed off back to Sweden on Valentines day. How romantic!  We had such a fun few months with the four of us living together – the last six weeks in the flat with Harry and Arty sharing a room! Very happy he’s back with his lovely wife Armel, but we miss him lots!

And finally… when the snow is at its prettiest…

It reminds us of why we’ve chosen to live in the mountains of the Haute Loire!

Mirabelle – our neighbour’s cat who has been our lucky mascot since the first day we came to look at the farm in summer 2016!

Thanks so much for reading – until next time – Bisous à tous!