A Taste of Summer

Here we are in May already – Blue skies and long grass, and the field is full of wild flowers.  I’m back at work again, with fingers strapped but able to drive!

Lots to tell – lots to show… so let’s get started!

Having abandoned the first Velux after my finger episode, we returned with zeal during the spring holidays – profiting from two full sunny days with Arty, Luke, Joe and me dedicated to making some holes in the roof and filling them with windows!

Day one – we managed to put the three smaller windows in the two mezzanine bedrooms and the bathroom:

Blue skies… smiling at me!

Up on the roof…

First hot sun of the year…Should have worn suncream!

Not the most regular of roof batons under those straight lines of tiles!

So lucky to have such easy access to the North side of the roof!

And the second hole appears

Luke and Arty on the roof – Joe and I inside – made for speedy progress!

All three windows in place –

End of a magnificent day’s work

On the second day, we tackled two bigger windows – one on the North side, and one on the South.  The safety needs change quite dramatically on the other side of the house, as of course it’s two storeys high. Arthur was so at ease on the roof by this point, so he took it on, securely harnessed and attached to the beams inside to keep him safe.  A few days later, Arty, Joe and I  put in another couple of big ones on the South side.

Our wonderful versatile tower has been invaluable to us.

We got this window in minutes before a storm broke!

Phew! Immediately put to the rain test – no leaks anywhere!

And last bank holiday weekend – we gambled again with threatening dark clouds on the horizon, and Arty, Luke, Joe and I managed to get the last two windows in!!

And what the hell… let’s go for the final one!

Massive psychological landmark to reach – the interior is totally transformed – flooded with bright sunshine in the day, and beautiful soft light in the evening or when it’s raining.

Joe has single-handedly wired up the whole house – hours and hours of intricate installation – we just need to connect it all up now.  Enedis will come and move the electrical entry point in the next few weeks – we had to drill a big hole in the wall, and we were lucky enough to have help from our friend Pierre Yves and his father in law who arrived with a massive drilling machine which effortlessly drilled through the stone! 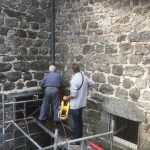 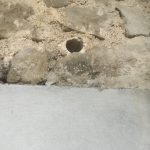 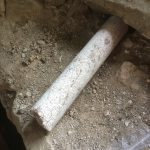 This was the stone cylinder which was removed! Joe’s going to make it a rolling pin for me!! 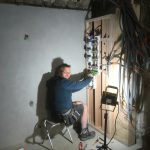 We have collected our beautiful new floor. To make space to store it all, we first had to clear out the old floorboards which we still want to use for furniture and other projects – boy those things are heavy!

We were lucky to have a team of Luke’s friends to help unload our beautiful floorboards:

Trailer number one… (there were 3)

A glimpse of what it will look like when it’s laid.

Time for a beer and a bit of lunch!

The guys then proceeded to load a trailer full of big heavy stuff for the dump – so appreciated!

Our beautiful beam is safely bolted into its resting place – plaster-boarding has begun, electric back-boxes (for plugs and switches) are in place, and we are really getting the feel of how the bedroom space will work.

Complete with light fittings, switches and plug back-boxes – the ladder of course won’t be there… our bed will!

We’re putting up plasterboard all over the place now – and every piece is thrilling as it starts to transform the space into our home!

The big spine wall dividing the living space and studio

Beautifully cut to fit the wall.

I’m tasked with the job of jointing and finishing… I’ve watched a few YouTube videos, and started learning my craft in the pantry, very forgiving as it will mostly all be covered! Flush with the success of my first attempts, I’ve moved on to the big spine wall –

I’m loving it! We shall see how good it looks when it’s finished and painted, but I find the process really satisfying… fair bit to go yet mind!

It’s so tall! That’s as far as I can reach from a ladder – need to move the tower across for that corner!

Below is the beginnings of the pantry door – reclaimed from an original door in the house – dismantled, adjusted and reassembled in the workshop by Joe – it will have glass panels. The pink box will house an electric cooker, with a microwave above. The freezer will live in the pantry, along with lots of open shelves of food and kitchen stuff – what a treat!

We are so nearly finished with the roof insulation; next we need to plasterboard it!

Arty had his 18th birthday in April  –  on the actual weekend of his birthday, Arty and Cassandra, Luke and Marie and Joe and I went and tried our hand at an escape game in St Etienne. We tackled their most difficult game, Paranoya – and achieved it with seconds to spare! Only 20% succeed, so we were pretty chuffed! So satisfying – and really good fun!

And last Saturday he celebrated with a bunch of friends in Solignac – BBQ, and a night around the campfire – I really love that he chose to celebrate his birthday at the house!

Setting up the fire pit

Sneaky photo as Joe and I slipped discreetly away!

I too had a birthday – and had the most lovely day!

Beautiful pressies, including a gorgeous yellow rose from Joe –

In the ground – oh and Mirabelle’s found a tiny bit of shade!

We finished the afternoon with a stroll down to the river (our first this year) – I cannot think of anywhere I’d rather have spent my birthday!

A little plastic cup of rosé

So that was Friday May 11th… two days later – this happened:

It was bloomin’ freezing – time to get the onesie out again!

It lasted a few days, but normality seems to have returned thank goodness! Really quite unsettling!!

Not only did Arthur have his 18th birthday, he also had his first tattoo! (Christmas pressie from Joe and I)

That’s all four of our children inked now! Who’d have thought it!

on the day – still wrapped!

It’s healed really nicely, and suits him so much:

And the final big news is that Arty passed his driving test…not only past it, but got a test result of 31/31 …. he’s good!

But before all that birthday fun – I took a whirlwind trip to the UK to have a girlie weekend with my Mum and sisters – we named it ‘The Onesie weekend’ as Mum kitted us all out in one… it was a heavenly few days of laughter and love!

Well I think you’re pretty much up to speed now – as always, thank you for joining us on our big adventure – Fingers crossed for a long and glorious summer! Rumour is we’re going to have a heatwave… bring it, on I say!